2017 is one month old and I just realized I haven’t posted since last year, so I thought I’d start off 2017 by walking you through various design trends and some predictions of what the architectural design-scape may look like in the not-so-distant future.

First up for trends: the color of 2017.  I know this was announced several months ago but you may not have noticed what color Sherwin-Williams nominated for color of the year.  The 2017 nod goes to SW 6039 Poised Taupe.  According to their literature, Poised Taupe is a combination of warm brown and cool grey = taupe.  The trend they’re seeing is a general warming-up of the neutral color palette.  I’m still a purist – whites or grays rule my paint preferences.  I would say the component pigments in Poised Taupe appear to have enough pink in them that under certain lighting the paint may indeed appear more red-pink than you might anticipate.

Second trend: Quartz counters.  I saw this Washington Post article last week which confirms what I’ve been seeing in modern houses for years now – Quartz (the engineered stone, not geologic stone called Quartzite which comes straight out of the ground) is now the most-chosen counter top material.  In its wake is the tried-and-true granite counter tops that were previously installed everywhere you looked.  Engineered quartz tops do contain quartz crystals, and along with pigments and resins (the binder) are compressed and formed into slab material that can be fabricated just like granite into counters, wall panels, whatever we dream up.

You’ve probably heard of brand names such as Caesarstone, Silestone, and Zodiac, and there are numerous other producers too.  Big bonus: most quartz slabs are essentially non-porous so it is very, very hard to stain the surface, and as such they are a good anti-microbial surface.  Expect price per square foot to run from about $40 upward to about $90 installed.  Factors affecting price include edge details, grading of the slabs, and labor rates in your area.  The image below shows four different choices of quartz slabs, generally arranged (left to right) in order of ascending cost.

Third trend: kitchens keep growing in size and features.  Up to the end of the 1990s kitchens were often separated from other living areas by walls and doors, and the trend in the 21st Century became open-plan houses with kitchens wide-open to living and dining areas.  Now the size of the kitchen keeps expanding to accommodate larger islands that often contain seating and dining space for the entire family.  I’ve seen a new house here in Dallas that had an island that measured about 8′ x 10′ – large enough for a sink and base cabinets and seating for over 8 people.  Given that you need about 4′ between counter tops, this kitchen probably measured about 20′ x 20′.  Large.

Fourth trend: the amenities are everywhere and growing.  Various industry publications have backed up what I’m seeing – amenity spaces are roaring back into designs at all but the lowest price-points.  Over half of the homes I’ve designed recently have walk-in pantries (not that new of a trend) but these rooms are becoming fairly large Butler’s pantries with wine fridges, spaces for baking, or places for additional appliances.  Larger garages are on trend too – the plain two-car garage just doesn’t meet homeowners’ needs in today’s world of more and larger vehicles, sporting equipment, workshops etc.  And as a true amenity that houses didn’t have when I was a child, storage spaces are a must in new designs and we’re not talking about the shallow hallway closet.  My own closets are fairly full of gear, things and items, and I’d love to have a walk-in storage room to organize all this stuff.

Our fifth and last trend comes from the world of brick.  Lighter colors and larger brick sizes are becoming more popular according to both Acme Brick and the Brick Industry Association.  Whites, grays, and other light colors such as tan are popping up more than ever – my recent site visits through Preston Hollow and Midway Hollow (Dallas neighborhoods) certainly confirms this trend.  In terms of sizing, modular brick used to be the gold standard for home construction but various similar sized brick began displacing modular brick (3 5/8″ thick x 2 1/4″ high x 7 5/8″ long) because the new sizes were thinner (using less material and lighter) or taller (masons have less courses to lay up a wall thus less labor).

I’m glad to hear about a resurgence in large-sized brick – it allows many modern choices for Architects to use on all building types.  And don’t forget large sizes in brick are nothing new.  Roman brick (now 11 5/8″ long) is aptly named because the longer modules were found all throughout ancient Roman architecture.  The exact size has changed throughout the centuries but the theme is the same – the longer modules allow for additional design flexibility and a more streamlined, modern appeal.

I can see it now…

Now some interesting predictions I’ve seen floating out there in print – check out this Bloomberg article for more info.

-The death of the home theater is coming.  Thanks to virtual reality (VR) headsets, some experts think the large media rooms will be left off of new plans since you can wear a VR headset just about anywhere you choose.

-The master bedroom will decrease in size as we spend less and less time within it and more time elsewhere in the house (or out of the house).  Gone will be areas for lounging and reading as the only space you’ll need in the master bedroom is somewhere for a bed and two nightstands.

-The master suite will become more segmented for greater privacy.  The article quotes one expert who says Millennials are driving this trend so that they can bathe or dress in privacy, out of sight from their spouse/significant other due to rising modesty or desire for privacy.  Maybe we’ll see the return of his-and-hers toilets too.  Not a bad idea to consider if your situation could benefit from it!

-Garages will shrink.  What, seriously?  Have they been to Texas recently where cars and trucks are king?  The Millennial trend for ride-sharing (think Uber) has lessened car ownership a little in some parts of the country but I see no end to the expansion of a “normal” garage for my clients.

-Lastly the Bloomberg article places the show kitchen on the endangered spaces list, with the belief that we’ll be 3-d printing our food in the future and we will not need so many kitchen appliances or cabinets.  Again I’m not so sure this prediction will ever come to pass – the kitchen is still the center of the home and the space where guests usually hang out.  My wife and I had a holiday party just before 2016 ended; every single guest stayed in our kitchen area and had a great time.  Not a single person wandered into our living room to sit down and relax.  Maybe the living room gets the shrink treatment in 15 years?

-Counter-depth refrigerators will grow in popularity.  Yes – finally!  I always wondered why the refrigerator had to stick out from the adjacent counters so much, but I believe the reason was to increase the capacity of the refrigerator over the last 40 years and respond to more cooking within the household.  If you cook more, you needed to store more groceries.  I checked a large online retailer’s website and traditional fridges that stick out from your counter about 8″ feature around 25 cubic feet of space, and comparable counter-depth fridges hold 20 cubic feet give or take a little space.  A 20% reduction in space is noticeable but I’ll recommend counter-depth any day of the week so your kitchen has a more integrated design and, in my opinion, looks much more modern. 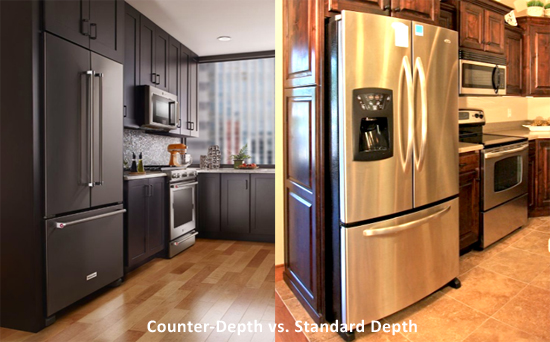 At Eckxstudio for Modern Architecture, we design unique and stunning projects, individually crafted for our clients’ lives. We partner with you and in learning about you and your family are able to express who you are in your new space, and are able to create an enriched and modern environment for you to live in and love. That’s our version of modern. That’s what we do.